It seems like Israel is evolving into a paradise for vegans. It was Gary Yourofsky that visited Israel in 2012 and the famous video that had such huge impact on so many Israelis. In the last couple of months we witness the opening of more and more vegan restaurants and in addition the old restaurants as well as cafe networks are having special vegan dishes.

I had the fortune of spending a two week vacation in Israel and I used a beautiful web site http://www.vegan-friendly.co.il/ which turned out to be very informative and helpful for Israelis but the problem is that it's all in Hebrew. This site lists restaurants that were found to be vegan friendly, that is, they do know what vegans are looking for, they do have special dishes that are marked as vegan and you can trust them not to fool you with some non vegan food. Some of these restaurants are totally vegan, some are vegetarian/vegan and some are serving animal based food but also vegan dishes.

Just for sports - I ranked the restaurants, sorted the list and I present them from the best to the worst.

Without doubt - this is the best vegan restaurant. It's totally vegan and many of the food carry the name of some animal based foods. For example roast beef. But don't worry - everything is plant based.

We visited the one in Eilat - it's located in Hemelicha St. - bad location. It wasn't so busy so I don't know if they can survive as a business but what can I say - the food was great. 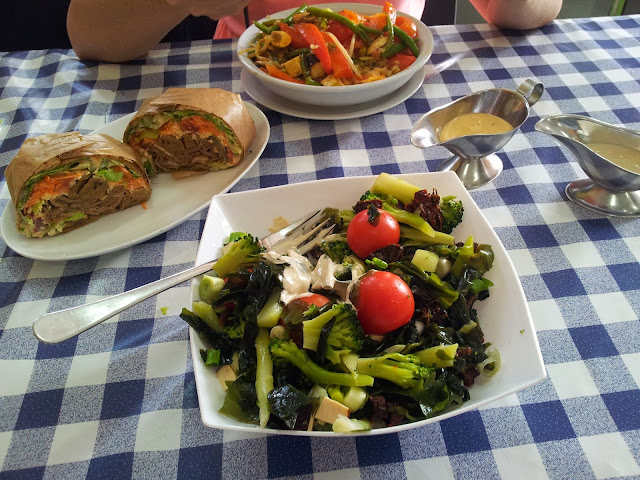 We also ate in the Tel-Aviv branch @ 21 Yehuda Halevi St. - again very yummy - you can see here the Halva based shake, her goulash and my forgot-what-it-was patties. What you don't see is the Tiramisu desert - well I knew that in order to make my special lady happy I should order something sweet - OK don't look at me this way - I don't eat this stuff, I only helped her a bit till she allowed me to finish what's left...

Located in 31 King George St. Tel-Aviv. It's not a vegan restaurant but sure is vegan friendly. We sat at the counter and could watch how they prepare the dishes. I ate there one of the best soups ever, I think it was tomato soup and also the other dishes were very good. 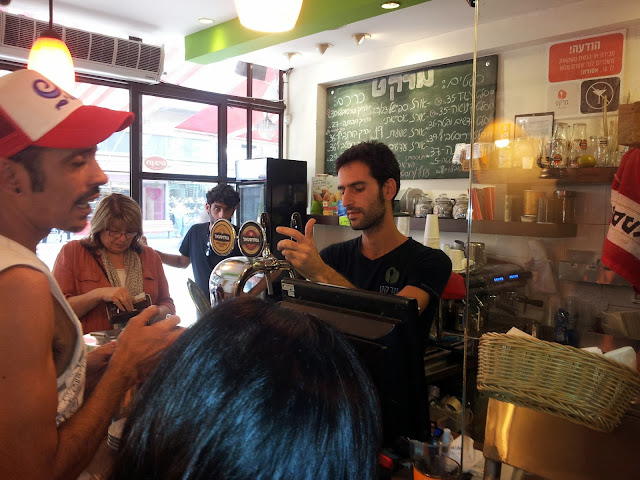 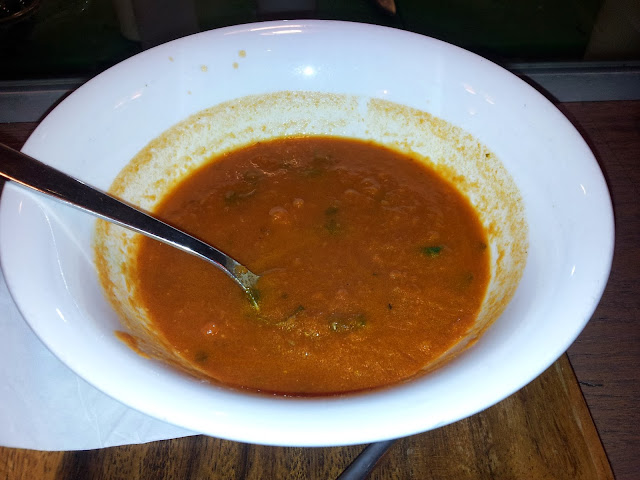 And here's the salad - 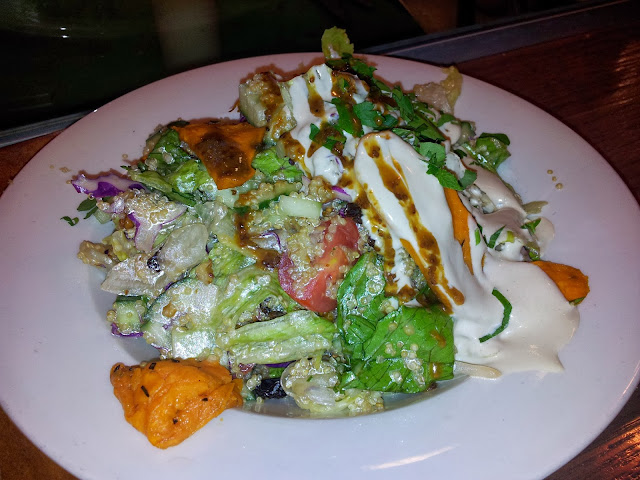 Located in 6  Yedidya Frenkel St. Tel-Aviv - Florentin. All the names of the dishes here are american meat products: hamburger, stake, etc, etc. The guy knows how to imitate meat using plant based products, he prepares his own marinades and the result is quite tasty. My special lady was delighted and said it was her best vegan meal ever. Well - I don't think so, it was good, yes but the dishes were small and we needed to ask for more and more dishes just to avoid hunger, but anyway - it's always a good feeling to come to a restaurant and to know that everything is vegan.

Located in 114 Ibn-Gabirol street. It's a young, a modern and a very busy restaurant that is vegan-friendly. I wasn't that hungry so I settled for the following dish with broccoli,quinoa, cauliflower, carrots and patties : 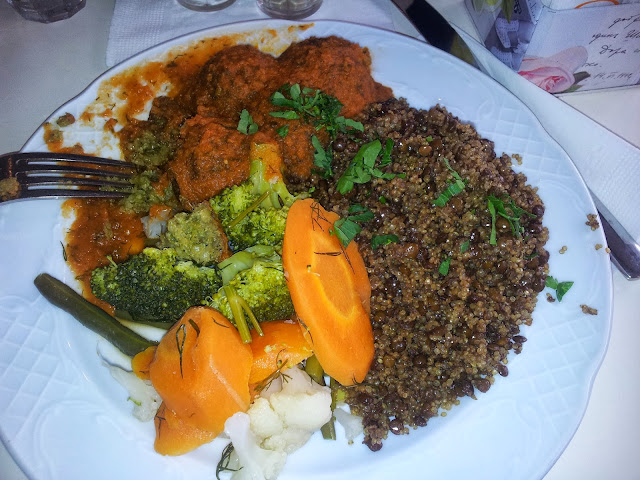 Located in 20 Pinsker St. Tel-Aviv. Run by perhaps 5 waitresses and 2 men in the kitchen - too many employees in my opinion... Food is good, there are special vegan dishes that are marked... very nice. 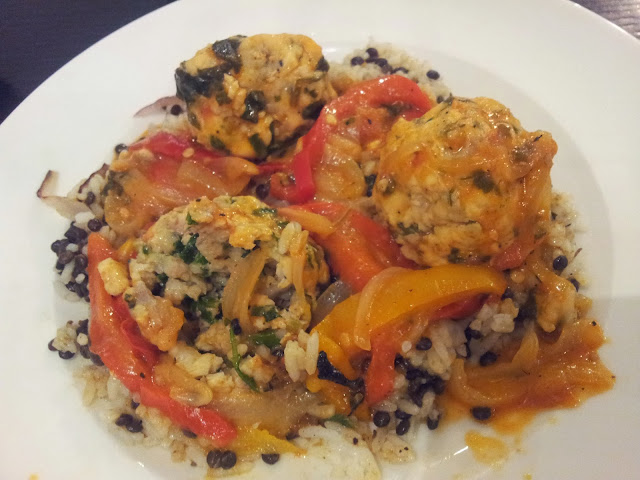 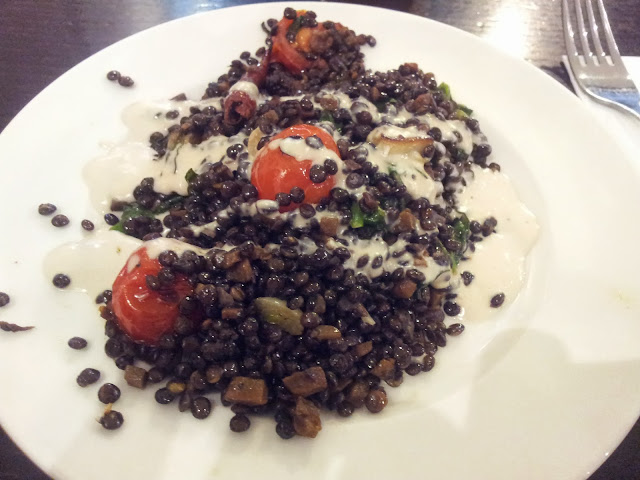 Located in 18 Mapu St. The owner speaks english and seems like some of the customers are either speaking english or Israeli nerds or both. Good music, positive atmosphere and good food. 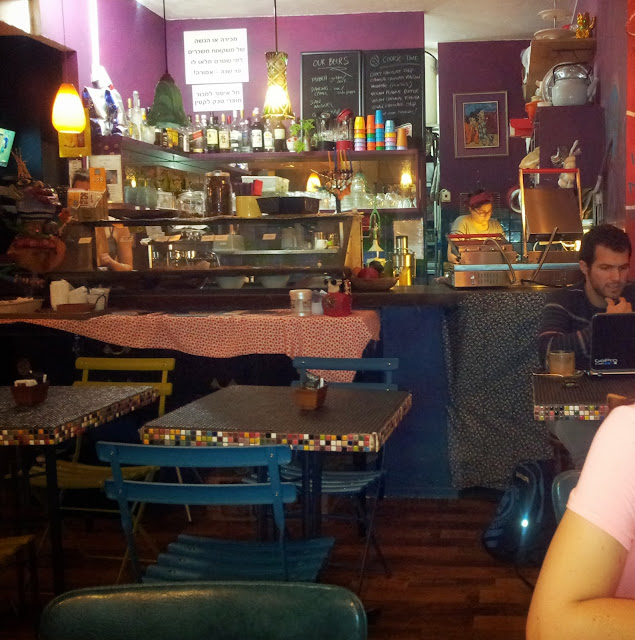 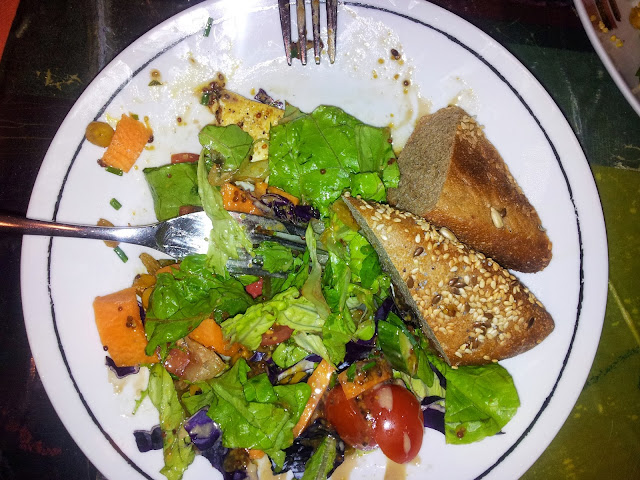 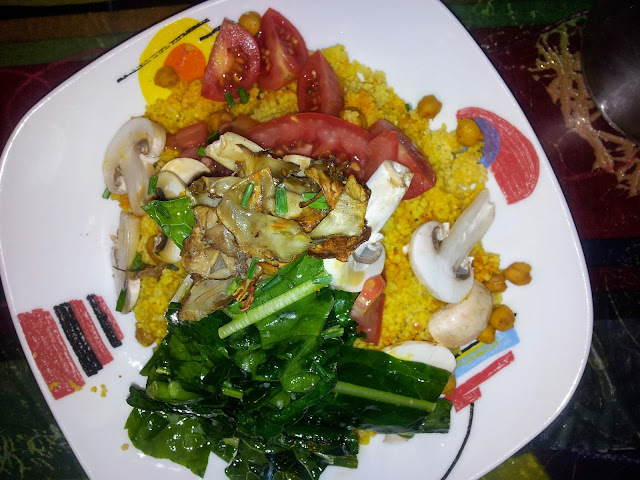 I visited all 3 of them - the one in Israel, the one in Jerusalem and the one in Eilat and I had very good time eating nutritarial vegan breakfast and dinner in those places. They have a very rich buffet with many vegetable plates. I was piling a mountain of vegetables, topping them with nuts and seeds that I brought from home or that they serve and voilla - a great, nutritious vegan feast where the salad is the main dish. They don't serve  beans so instead I was eating humus and fool. I was also pouring tahini over the salad as a dressing and for the fruit I was eating sliced oranges. I didn't need to eat any of their prepared foods - pancakes, cakes, omlates, chicken breast and all that - this is food for the normal people. In Tel-Aviv I was even given a very yummy dish with cooked vegies and nuts - clearly it was prepared by a chef! It was very yummy, a bit oily but very nutritious.

Here's what I ate in Dan Panorama Jerusalem for breakfast: 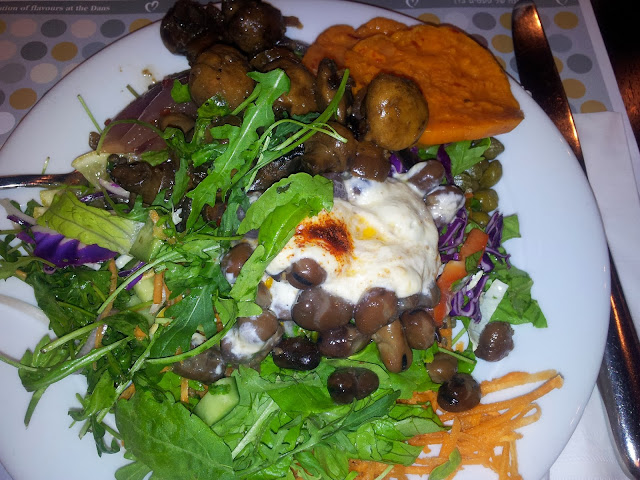 And here's another dish that I built on the next morning - 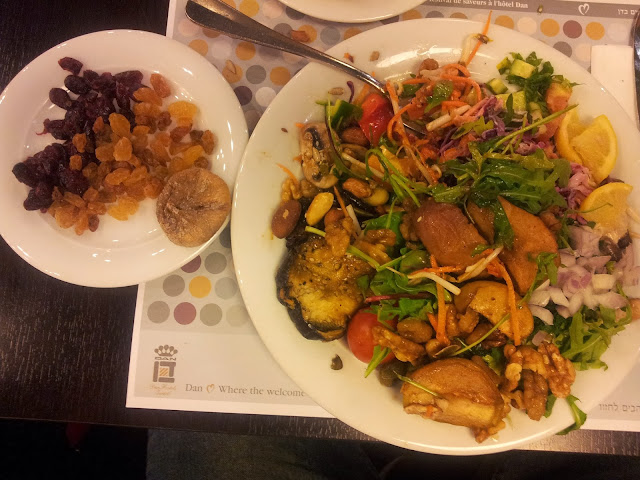 And then on the next morning - more or less same deal 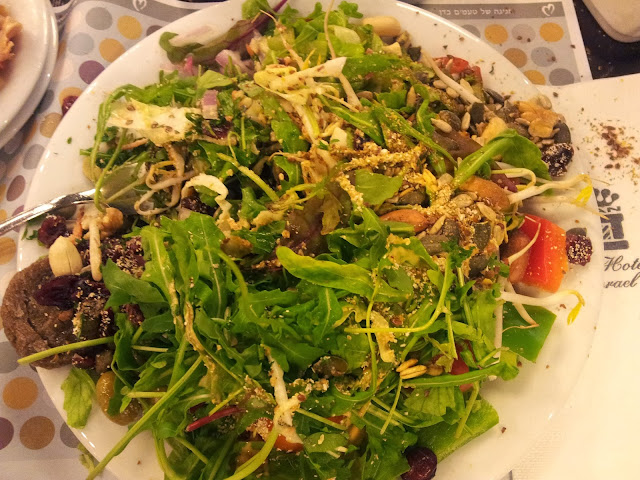 And dinner that day - 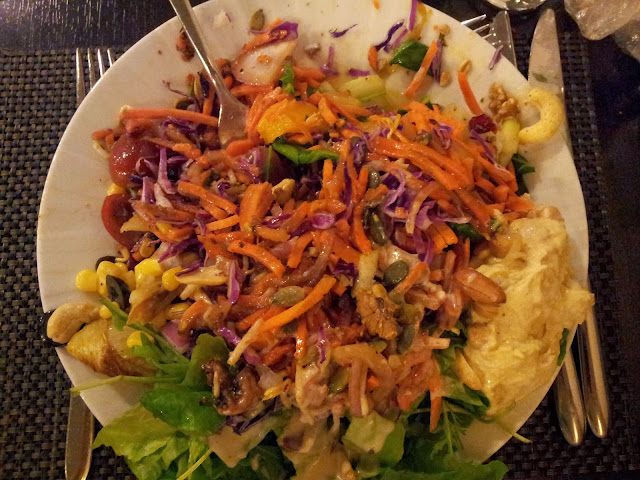 And the morning after - see that mountain? 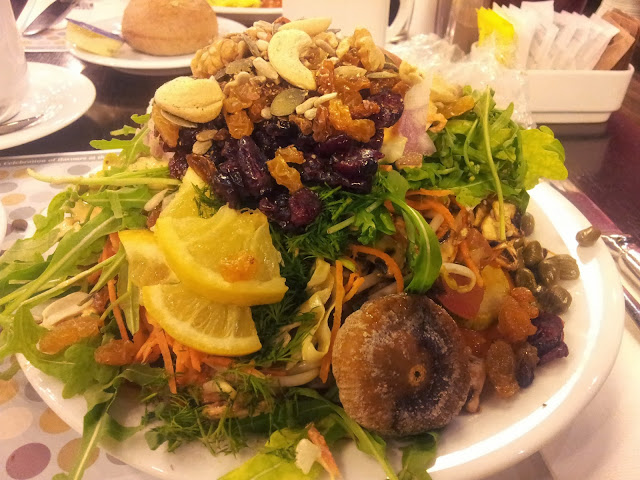 This recommendation applies to any respected hotel - you don't have to even ask for a vegan dish - all you need is right there and at abudant quantities.

This is an Israeli network of cafes and they have distinguished dishes for vegan. the dishes are huge by any standard. I took the roots based veggies and it was very yummy. The only problem is again - the bread - their sandwiches and the bread that comes with the salad are called 'whole wheat' but they are not - they are brownish yes - but they are not whole wheat bread. I ate some, avoided some but I mean what can you expect? 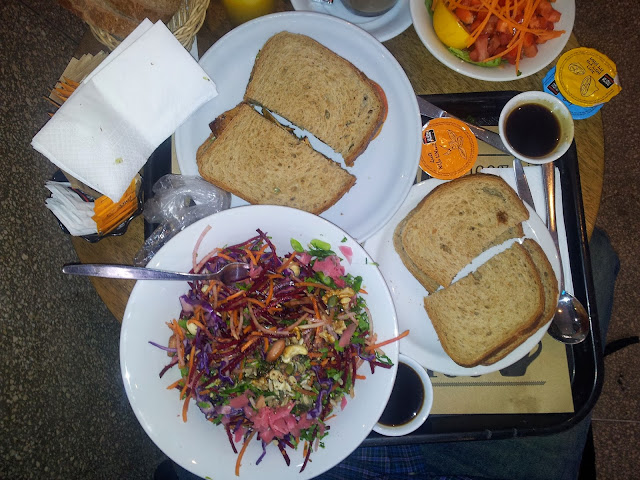 Located in 98 Alenbi St. Tel-Aviv. This is one restaurant 'with character' - all the chairs and tables are old, nothing matches in the mess. The music is Indian or Pakistan which I really love and the food is totally vegan but I ate humus, fool, with lots of oil - not the salad type of a meal. 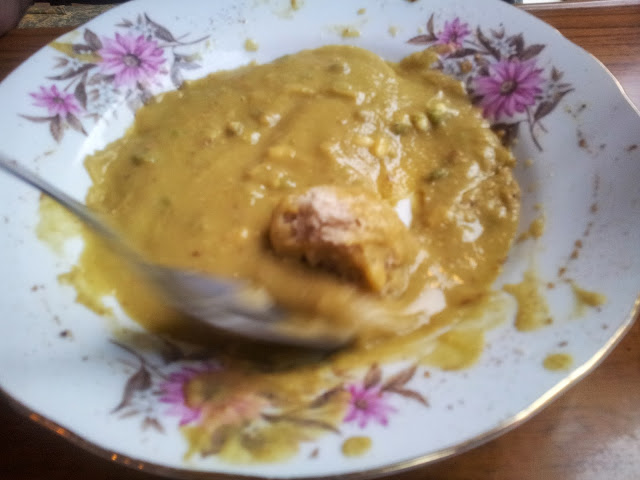 Located in Hadolphin St. Jafa. It's not a vegan restaurant, not vegan friendly but the employees are friendly and the humus is good and the fool is great. Yes it's oily but I think every once in a while one should enjoy such good and simple restaurant. 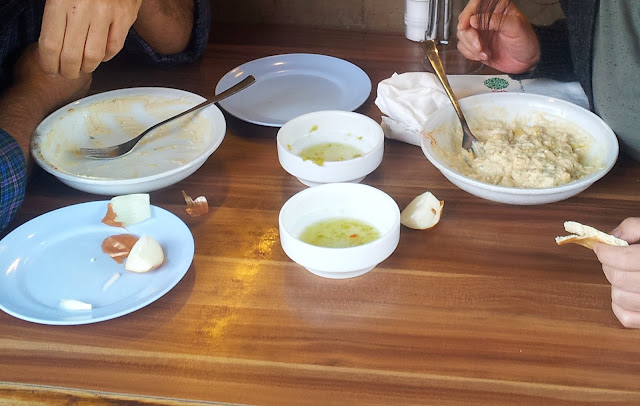 Here they have two cafeterias - a dairy  and a non dairyone. The non dairy had plenty of vegetables, most of them cooked so I formed a mountain of these vegies, added my nuts&seeds and it was yummy.

Druz and arab restaurant in Tiebrius

At noon we were eating in local restaurants were the salad is only a supplement but they always have so many vegetables to choose from so here too was the same drill - a mountain of salad topped with humus, tahini and nuts that I brought from home.

This one was problematic - there was only pita with falafel or pita with meat. I had to ask for pita with salad and of course the amount and quality of the salad was poor and the pita - that's a big sin - it's not a whole wheat pita - it's made of what I call 'instant carbs' that I want to usually avoid, but I was hungry so I settled for this lousy 'dish'.

It's a Japanese restaurant in Eilat Promenade, Full of air, expensive and dishes are so small that if you continue eating them for one month then you become a small Japanese. I still beat myself - why oh why did I chose this restaurant. Yes they do have plant only dishes - here - 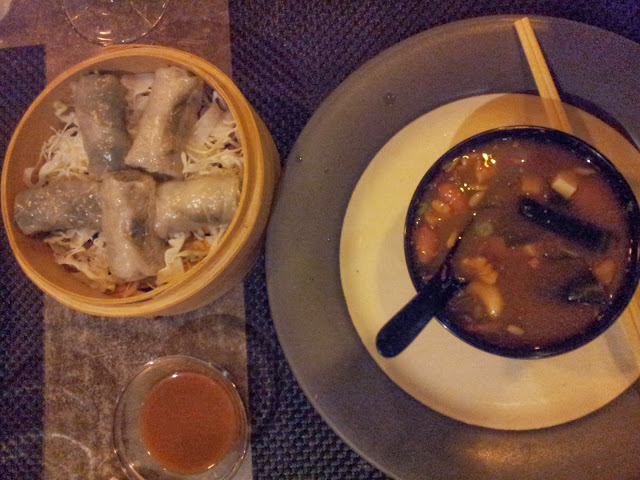